The scaling of circulating cooling water systems is a common problem encountered in industrial production. The scale can significantly reduce the efficiency of the heat exchange system. At present, the industry has adopted a method of adding a phosphorus-containing scale inhibitor to the cooling water system to prevent corrosion and scaling of the water pipe wall. 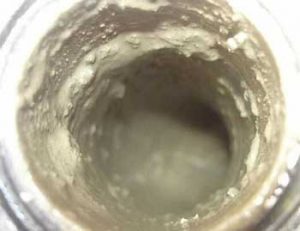 If the distance of the functional group is close to that of the isomorphic ion, the electrostatic attraction will cause a strong adsorption action. This hinders the further accumulation of calcium ions and carbonate ions and then inhibits the growth of calcium carbonate crystals.

The electrical properties of the HEDP molecule and the PBTC acid molecule are neutral overall, with a negative charge only at the phosphonic acid group [(HO)2OP-] and the carboxylic acid group [-COOH]. This is consistent with the theory presented earlier. Negatively charged oxygen ions are prone to strong electrostatic effects with Ca2+ on the surface of calcium carbonate.

The Following Describes HEDP and PBTCA in Detail.

HEDP is an organic phosphonic acid scale and corrosion inhibitor. It can form a stable complex with various metal ions such as iron, copper, and zinc. HEDP acid dissolves oxides on metal surfaces. It still provides excellent corrosion and scale inhibition at 250 °C. HEDP is still stable at high pH values, is not easily hydrolyzed, and is generally difficult to differentiate under photothermal conditions.

HEDP chemical has better acid and alkali resistance and chlorine oxidation resistance than other organic phosphonic acids (salts). It forms a six-ring chelate with metal ions in water, especially with calcium ions. Therefore, HEDP acid has a good scale inhibition effect and has a significant solubility effect. It exhibits excellent synergistic effects when used in combination with other water treatment agents.

PBTCA (2-phosphonobutane -1 2 4-tricarboxylic acid) is a new generation of phosphocarboxylic acids created in the 1980s. It is currently popular with low phosphorus corrosion and scale inhibitor. PBTCacid is now widely used in industrial production. It is composed of a dialkyl phosphite, a dialkyl maleate, and an alkyl acrylate as raw materials, and is subjected to one-step repeated reaction under strong basic catalytic conditions. The yield was 87.7%.

PBTC chemical is widely used in circulating cooling water systems and oilfield water injection systems. PBTCA has excellent functions of blocking calcium carbonate and calcium phosphate scale. It has a common stability effect on zinc ions and the like. Zinc ions can be stabilized in circulating cooling water having a pH of 8.3. It is also stable at a pH of 9.5. This makes it possible to formulate zinc-containing alkaline formulations.

After professional research and analysis of the effects of HEDP and PBTC in the circulating cooling water system, the final solution needs to be determined according to the environment. Avoid losses due to mistakes in selection.