HPMA is a green water treatment chemicals. It is easy to obtain and has a cheap price. Hydrolyzed polymaleic anhydride (HPMA) has excellent performance and wide application. HPMA scale inhibitor has the following advantages.

(1) Both the lattice distortion and threshold effect.

(2) It has the effect of dispersing calcium carbonate and calcium sulfate crystallites. Even if the scale is formed, it is loose. This scale is easily washed away by water flow. Therefore, polymaleic acid has a good effect of inhibiting scale formation and stripping of the old scale.

(3) It has high thermal stability and can be used at higher temperatures.

(4) The reaction is sufficient and the bromine value is low.

(5) It can be used in combination with zinc salts and organic phosphonates. Due to the synergistic effect, polymaleic acid not only has a scale inhibition effect but also has excellent corrosion inhibition effect. 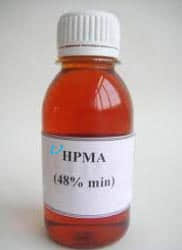 HPMA uses water as a solvent and hydrogen peroxide as an initiator. High quality HPMA products are synthesized in one step under the action of a catalyst.

The method has the following advantages. Short reaction time. Simple operation. Low cost.No pollution. And the amount of initiator is small.

Hydrolyzed polymaleic anhydride is stable and has a good scale inhibition effect. This is a green method for synthesizing HMPA with good social and environmental benefits.

Steel, power generation, chemical, and other industries need to use a large amount of cooling circulating water. As the number of cycles increases, the concentration of circulating cooling water increases and the concentration of salt in the water increases. This can easily cause corrosion of the equipment, precipitation of crystals on the heat transfer surface, accumulation into a dense scale layer, which adversely affects industrial production equipment.

Therefore, ‌polymaleic acid scale inhibitor must be added to industrial circulating water to slow down and prevent the precipitation and scaling of insoluble materials on the metal surface, and to maintain the service life and heat transfer effect of metal equipment.

Steel, power generation, chemical, and other industries need to use a large amount of cooling circulating water. As the number of cycles increases, the concentration of circulating cooling water increases and the concentration of salt in the water increases. This can easily cause corrosion of the equipment, precipitation of crystals on the heat transfer surface, accumulation into a dense scale layer, which adversely affects industrial production equipment.

Therefore, ‌polymaleic acid scale inhibitor must be added to industrial circulating water to slow down and prevent the precipitation and scaling of insoluble materials on the metal surface, and to maintain the service life and heat transfer effect of metal equipment.

HPMA is a class of polycarboxylic acid scale inhibitors with the following characteristics.

Hydrolyzed polymaleic acid has the above performance characteristics based on its scale inhibition mechanism and poly maleic acid structure.

The active carboxylic acid group (COOH) of the HPMA molecular chain length is chelated with Ca and Mg ions. This will occupy the crystal lattice growth point or be embedded inside the crystal, causing a small deformation of the crystal structure.

It is indicated that the mechanism of scale inhibition by HPMA is to inhibit crystal nucleation, that is, to inhibit the growth of calcium carbonate. At the same time, HPMA makes the crystal lattice distortion and makes the scale soft. HPMA enhances scale inhibition and greatly reduces the tendency of water to foul. The usage and dosage are shown in the table below.

The hydrolyzed polymaleic acid corrosion inhibition mechanism is as follows.

Bromine value in HPMA is an important indicator. It reflects the degree of polymerization between the various materials at the end of the reaction in the synthesis process. The lower the bromine value, the more thorough the reaction and the less the reaction residue.

The table below is a comparison of bromine values.

At the same time, due to the complementary performance of different corrosion and scale inhibitors, the compounding agent is adapted to different environments.

The researchers used polymaleic anhydride (HPMA), 2-phosphonobutane-1,2,4-tricarboxylic acid (PBTCA), hydroxyethylidene diphosphonic acid (HEDP), 2-acrylamide-2-methyl The propyl sulfonic acid (AMPS) was compounded to analyze the scale inhibition synergy between the chemicals. As a result, the ternary system composed of HEDP, HPMA, and PBTCA has an excellent synergistic effect on scale inhibition, and the scale inhibition rate is as high as 98.4%.

How to Control Biological Pollutants in Water from Reverse Osmosis with Non-oxidizing Biocide?

Abstact Biological pollution has a bad influence on the running process of industrial ro water systems. It greatly reduces the role of membrane technology in water treatment. Study the formation of biological pollution in industrial reverse osmosis water system. Analyze the characteristics of non-oxidizing biocides. Take DBNPA as an example.   The development of commercial […]