The volume of the bioreactor is 2L, the concentration of the tested substance is 1/1000, the concentration of the inoculated sludge is 500mg/L, the reaction temperature is room temperature (about 25°C), and the reaction time is 14 days. The experimental results show that the polyacrylic acid polymer studied can be completely biodegraded after 14 days.

At present, the evaluation index for the biodegradability study of organic matter can be measured according to factors such as the reduction of organic matter, the consumption of oxygen or the amount of carbon dioxide generated, and the content of high-energy phosphoric acid.

In addition, it can also be evaluated by observing the physiological and biochemical changes of the inoculum. The most used are BOD5, COD, dissolved organic carbon (DOC), carbon dioxide production (PCD), ATP content and so on.

Among them, nitrification has an effect on BOD, and the adsorption of microorganisms has an effect on the experimental results of DOC. The amount of carbon dioxide (PCD), as a new method for evaluating the biodegradation of organic matter, has the least influencing factors and can reflect the degree of complete inorganization of organic pollutants.

The research object of this experiment is a polyacrylic acid polymer, which is a milky white suspension. The main components include monomer (two-component monomer including hard monomer and soft monomer), initiator, emulsifier, carrier medium water. The monomers are mainly acrylates, and mainly include ester compounds such as methyl methacrylate, ethyl methacrylate, isobutyl methacrylate, hydroxypropyl acrylate, methyl acrylate, and butyl acrylate.

Further, the emulsion also contains a small amount of an emulsifier (sodium dodecyl sulfate), an initiator (azobisisobutyronitrile), and the like.

The test device is shown in Figure 1. In order to remove CO2 from the intake air. A three-stage absorption device is used.

The first stage and the second stage were each absorbed with 150 mL of 1.00 mol/L NaOH solution. The third stage was absorbed by 0.10 mol/L Ba(OH) solution. This will not only test the absorption of the first two stages but also completely absorb CO2.

It is then washed in a water wash bottle to prevent lye from entering the bioreactor. To ensure good absorption, replace the absorption device regularly.

The CO2 produced during the biodegradation process uses a three-stage absorption device, and the third stage is absorbed by a 0.05 mol/L Ba(OH)2 solution in a volume of 100.0 mL. Replace the device every two days and titrate with 0.1000mol/L HCI solution

The activated sludge from the sewage treatment plant was used as an inoculum. Continuous aeration was carried out with an air pump of 135.0 L/h and domesticated for 10 to 15 days.

First, the sludge mixture was aerated for 24h. Two drops of 0.001 mol/L of the polyacrylic polymer solution and 10 ml of the culture solution were added every day for the next 2 days.

On the 5th and 6th days, 1.0 ml of a 0.001 mol/L polyacrylic acid polymer solution was added to acclimate culture. At the same time, a small amount of the originally activated sludge supernatant and 10.0mL of the culture solution were added. When the sludge mixture is uniformly dispersed brown sludge flocs, it indicates that the microorganisms have been initially domesticated and matured.

Thereafter, a 1.00 mL of a 0.001 mol/L polyacrylic polymer solution may be added for cultivation until it is used for the experiment.

The reaction temperature was about 25°C (room temperature), the gas flow rate was 25.0L/h, and the reaction time was 14 days. The amount of carbon dioxide produced and the COD value was measured every two days.

Take the supernatant from the endogenous reaction flask and bioreactor for 14 days after biodegradation. Place in a watch glass and dry in an oven at 30°C-40°C (about 72 hours).

The dried samples were placed by tableting method, and infrared and spectroscopy experiments were performed on the blank and polyacrylic polymers, using a WQF-310 Fourier infrared spectrometer.

The polyacrylic polymer solution is a mixture of a polymer and a monomer. During the first 2 days, microbes quickly experienced a stagnation period.

At the beginning of the stagnation period, a part of the microorganisms suitable for degrading monomers quickly adapt to the environment and quickly enter the end of the stagnation period. The cell material increases, the cell volume increases, its long axis grows at a particularly fast rate, the cell metabolism is strong, the respiratory rate, the nucleic acid, and protein synthesis rate is close to the log phase cells, and the cell division begins, with the monomer in the solution The microbes of nutrients are rapidly increasing in geometric progression. 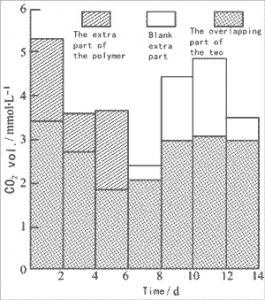 At the same time, since the polymer is more difficult to degrade than the monomer, the enzymes that degrade the polymer are not required for the time being and are not subjected to induction synthesis, they exist at a very low concentration level or exist only as information in the DNA. Other microbes that are not adapted to the environment die.

After 2-4 days, after two days of degradation, the amount of monomer in the solution is greatly reduced. A large number of monomeric microorganisms, part of which begins to adjust their enzyme system to adapt to the lack of monomer and high polymer concentration. new environment.

Because the microorganism does not synthesize all the enzymes it can synthesize under any circumstances. They actually only synthesize enzymes that are necessary under certain environmental conditions, which is also the “economic” principle that microbes follow.

In this case, the synthesis of the previous polymerase is actually inhibited by a repressor acting on the DNA. The appearance of the inducer relieves the repressor’s repression of DNA, causing the gene fragment on the DNA to initiate its “command” process and begin the synthesis of polymer-induced enzymes.

On days 2-4, overall, the activity of the microorganisms decreased, and the amount of CO2 decreased on the image.

On days 4-6, the microorganisms that degrade the polymer are rapidly multiplied, and the polymer is rapidly degraded and fully utilized. This process is called secondary growth.

During this period, the microorganisms were rich in nutrients, the cell metabolism activity was enhanced, the speed of synthesizing new cell substances was accelerated, and the microbial growth was strong. On the image, the amount of CO2 has risen again.

On days 6-8, due to the rapid growth of microorganisms in the log phase, a large amount of polymer is consumed.

After the quiescent period, due to the depletion of nutrients, the microorganisms use the stored material for endogenous respiration due to lack of nutrition. As a result, the amount of CO2 has decreased significantly.

In 8-12 days, some microorganisms use the cellular material after the lysis of dead microorganisms to synthesize the nutrients they need, and the amount of CO2 also increases.

Between 14 days, a large number of metabolites accumulate due to the degradation of polyacrylic acid polymers, resulting in the production of bacteria toxic. Therefore, it can be seen from the figure that after 6 days, the microbial activity in the bioreactor is lower than that in the endogenous reaction bottle, and the number is small, but the trend is consistent. 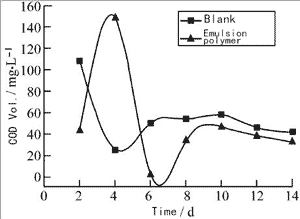 The polyacrylic acid polymer solution has two parts of a monomer (easy to rapidly degrade) and a polymer (which is not easily degraded rapidly).

According to the COD image analysis of Figure 3: First, on the second day, due to a large amount of monomer degradation during the two days, the microorganisms present in the mixture are mainly microorganisms degrading the monomer type, and represent this part of the COD of the polymer. The value is not reflected, the polymer is not oxidized by the strong oxidant, so the COD value measured in the polyacrylic polymer only represents the COD value of the microorganism in the mixture and the COD value of the monomer which is not completely degraded, compared with the endogenous respiration process. The microbial COD value is less.

On the sixth day, the polymer was degraded in a large amount, and the decomposed small molecular weight organic matter was also rapidly degraded, and the residual small amount of monomer COD value was further converted into a simple inorganic substance. At this time, the COD value was greatly decreased.

The infrared spectral curves of the blank and polyacrylic polymers are shown in Figures 4 and 5.

These wavenumbers reflect the functional groups in the bulk structure of the microorganism. In the polyacrylic acid polymer, there is a large peak at a wavenumber of 3492 cm-1, and there is no such peak in the blank.

At this wavenumber, a large amount of NH2– is present, and NH2– is a product of microbial metabolism. The presence of NH2– indicates: 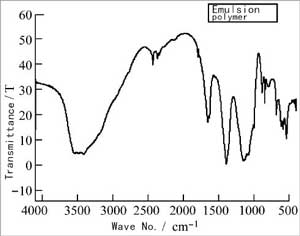 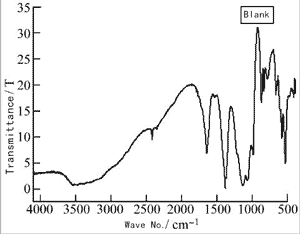 In this study, the biodegradability of polyacrylic polymers in the environment was studied by the aerobic biodegradation method, and the following conclusions were drawn.

In the aerobic environment, it can be seen from the COD curve and the PCD curve that the COD value and PCD value of the 6-day acrylic polymer is greatly reduced, and it can be inferred that most of the organic matter has been degraded.

It can be seen from the infrared spectrum that the polyacrylic acid polymer has good biodegradability and can be completely degraded after 14 days.

At the same time, based on the PCD curve image, some new ideas are proposed: the carbon dioxide amount (PCD) histogram analysis method.