The Difference of Anti-scaling Mechanism in Water Treatment

If the scale is not treated in time, it is easy to cause damage to industrial production equipment, which will affect the normal production schedule and cause losses. 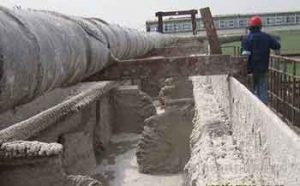 Many experienced factory producers know that the sewage produced in industrial production is often different.

Even the same sewage will often differ in actual treatment. Otherwise, there will be no products such as reverse osmosis scale inhibitors or corrosion inhibitors.

In addition, this will produce a large amount of tiny crystalline particles. It is then gradually precipitated through the cooling tube during the process of the tube wall to form a complete deposit, thereby fouling.

The scaled layer is continuously dissolved, and on the other hand, the gradually thickened, hardened precipitate is a process of dynamic equilibrium.

The water treatment chemical has excellent adsorption and dispersion effects due to its structure having a plurality of carboxylic acid groups and solvation chains. And the microcrystalline particles are adsorbed on the microcrystalline particles to hinder the contact of the particles. To calcium carbonate, sulfates such as water precipitate crystallites or deposits are dispersed in order to achieve scale inhibition.

During the adsorption process, a new electric double layer is formed on the surface of the particles, causing a change in the state of charge. The principle of mutual exclusion of the same charge is stably dispersed in the solution.

So far, it has been considered by research that the positive anion of sodium polyacrylate in aqueous solution and the surface of the dirt are attracted and adsorbed on the surface of the microparticles due to the opposite charges. The adsorbent layer formed by the active dots covers the formed scale, making it impossible to continue to grow.

According to research, the scale inhibitor molecules in the process simulation pass through lattice distortion, or occupy crystals or embed in crystal growth. With a small change in molecular structure, the formation of scale is effectively prevented. Or cause lattice distortion in the internal crystal. Coulomb interaction and electrostatic adsorption behavior of polymer molecules with negatively charged functional groups and insoluble calcium salts with calcium ions.