Home
News
The Potential of Water Treatment Chemicals in Africa 2018

The Potential of Water Treatment Chemicals in Africa 2018

With the increase in population in Africa and the development of the economy, drinking water sources are seriously polluted. Nearly half of African countries have a drinking water supply rate of less than 50%.

With the improvement of living standards, the demand for water treatment chemicals will continue to increase. Therefore, China-Africa cooperation in the field of water treatment has broad prospects.

However, its urbanization has grown very fast, reaching an average annual rate of 3.5%. It is predicted that the urban population of Africa will account for 50% of the total population in 2030. 60% will be reached in 2050.

Due to population growth and urbanization, the problem of environmental pollution and ecological damage in Africa has become increasingly prominent. A large amount of industrial wastewater, domestic sewage, and agricultural wastewater are directly discharged into natural water bodies without treatment. The lack of water supply pipe networks and sanitation has made it difficult for many African cities to obtain enough and safe drinking water.

The Safe Drinking Water Coverage in African Countries is shown in Figure-1. 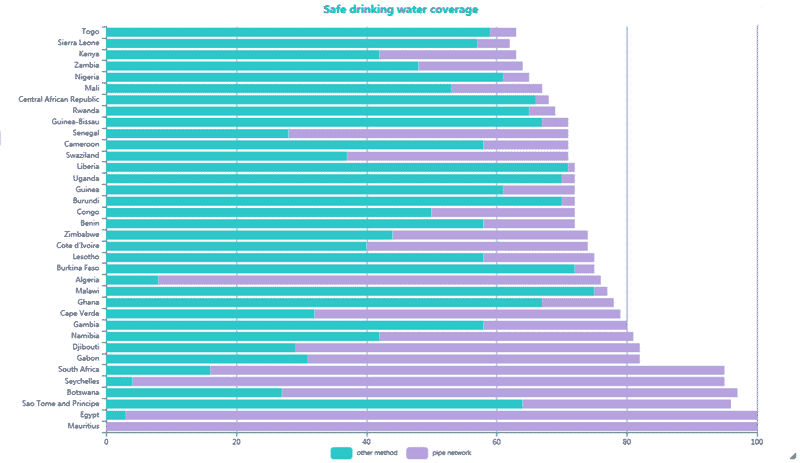 Therefore, there will be huge investment needs in drinking water treatment in the next 20 years.

The level of industrialization and the level of urbanization in Africa continue to improve. Industrial production and residential life processes produce large amounts of domestic and industrial wastewater. However, due to the imperfect of the supporting sewage collection system, most domestic sewage and industrial sewage are directly discharged into the environment without treatment. This poses a serious threat to the environment and human health. Some of the completed water plants also often have problems such as excessive water load. Therefore, there are huge market demands for water treatment chemicals in Africa.

Due to the economic backwardness in Africa, the rate of drinking water and sewage treatment is very low. It is a market with great potential. The global water treatment market demand in 2018 is shown in the pie chart. As can be seen from the pie chart, the demand for water treatment chemicals in Africa and the Middle East is only 5%.

The Global Water Treatment Chemicals Market Size Statistics from 2012 to 2018 are shown in Table-1.

China and Africa face many similar environmental problems. It is our common responsibility to respond to global climate change and protect the ecological environment. Due to the low level of economic development, basic sanitation facilities, drinking water treatment and supply rates, living and production wastewater treatment rates in African countries are at extremely low levels. The established water plants in Africa also have problems such as poor operation, simple process level, low technical level, and inadequate water quality.

Therefore, as the African economy continues to grow, the demand for drinking water and wastewater treatment will continue to increase. Through the cooperation between China and Africa, water treatment technology will play a greater role in the sustainable development of the local economy and society.